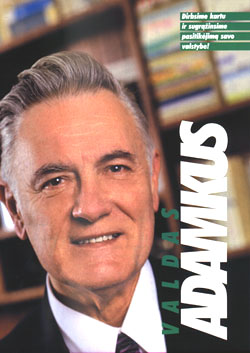 Candidate for President
Republic of Lithuania

Heading towards the 21st century, Lithuania is rising for new prosperous life. To assist her on this road I offer a resolute reform of the State.

The bulwarks of the State are freedom and responsibility, a civic and open society, as well as a democratic structure of government based on the rule of law. Lithuania must embrace welfare and social justice stemming from private initiative, thus becoming a country of equal opportunities for each citizen.

Valdas Adamkus was born to a family of civil servants in Kaunas on 3 November 1926. His father served as a volunteer in fights for Lithuanian Independence and was one of the first leaders of the Aviation School in the then newly fledged pre-war Republic of Lithuania. Adamkus' mother worked at the Ministry for Communications for many years.

Valdas Adamkus studied at the Ausra [Dawn] gymnasia in Kaunas. In the years of World War II, he joined a resistance movement for Lithuanian independence, published and circulated the underground newspaper Jaunime, budek! [Youth, Be on Guard!].

After a brief retreat with his parents to Germany in July 1944, Valdas Adamkus returned to Lithuania in the fall of the same year to join the National Defence Force in fight against the Red Army. He took part in the battle of Seda, western Lithuania, but had to leave Lithuania again soon because of unfavorable circumstances. Upon graduation from the Lithuanian Gymnasia in Germany, Adamkus entered the Faculty of Natural Science of the University of Munich. He worked at the World YMCA organization taking care of displaced persons and acted as the secretary general and chairman of the Chief Physical Training and Sports Committee. Adamkus won two gold and silver medals in track-and-field events at the Olympic Games of the Enslaved Nations in 1948.

Assisted by the Grinys family, Valdas Adamkus together with his parents, brother and sister emigrated to the United States in 1949. Upon arrival, he immediately found a blue-collar job with a manufacturer of spare car parts in Chicago and later worked as a draftsman for an engineering firm. In 1960, Adamkus graduated as a construction engineer from the University of Illinois. In 1951, Valdas Adamkus established an academic sports club of Lithuanian Americans, LITUANICA. Between 1957 and 1958, he chaired the board of the Santara [Accord] center of Lithuanian students in the United States. In 1958 through 1965, Adamkus was vice-chairman of the SANTARA-SVIESA [Accord-Light] federation, a public organization of Lithuanian �migr�s of Liberal orientation, to take up its chairmanship in 1967. Valdas Adamkus was an active organizer of protest actions against Lithuania's occupation and initiator of numerous petitions. In 1961 through 1964, Adamkus was a member of the Board of the Lithuanian Community [LC] in America, vice-chairman of the Central Board, member and then chairman of the American Lithuanian Council [ALC]. He also was chairman of the organizing committee of the World Lithuanian Games in 1983.

Working for a US environmental protection federal institution set up with the Environmental Protection Agency in the early 70's, Adamkus first headed a scientific environmental research center and was later appointed deputy administrator of the Fifth Region (Mid-West) Environmental Protection Agency. He was later promoted to administrator of the same agency and held that office until June 1997. Adamkus was an active member of the United States Republican Party. Since 1972, he visited Lithuania once or several times a year, bringing the literature published by SANTARA-SVIESA -- Metmenys [Outlines], Akiraciai [Horizons] and others. Encouraging and supporting the construction of water purification facilities and development of environmental monitoring, Adamkus assisted the environmental institutions of the Baltic States in acquiring academic literature, equipment and software needed for their projects. In the capacity of the coordinator of US aid to the Baltic States in the field of environment protection, Adamkus organized working trips for representatives of Lithuania's academic institutions and developed many-sided cooperation with Vilnius University, helping it acquire the latest academic literature on environment. Adamkus raised and implemented the idea of publishing Lithuanian History by Adolfas Sapoka in 300,000 copies and the two-volume edition of Modern History by Pranas Cepenas in Lithuania.

Valdas Adamkus was granted the title of Honorary Doctor at Vilnius University in 1989. The American universities of Indiana and Illinois named Adamkus their Honorary Doctor as well for his contribution to the cleaning of the Great Lakes and for other environmental projects. In 1988, Adamkus was granted an international environmental award for outstanding achievements on the international arena. Adamkus has himself established an award granted each year to Lithuania's noted environmental specialists and scholars.

Adamkus has also been granted the US Environmental Protection Agency gold medal for achievements in service and the award of the US President for outstanding service. President Bill Clinton sent a letter of thanks to Adamkus when he resigned as the agency's administrator. In 1993, Valdas Adamkus headed the electoral campaign of presidential candidate Stasys Lozoraitis in Lithuania. He actively participated in the campaign before the 1996 Lithuanian general elections, uniting a bloc of moderate right-wing forces. In 1997, Adamkus was nominated by the Lithuanian Center Union for the council of the Siauliai municipality.

Valdas Adamkus' wife Alma is the administrator of the Taba Farma holiday center.